What is ninja? It is a sport which involves a number of athletes competing one at a time on a set obstacle course. The goal is to complete the most obstacles in the shortest amount of time. For the sake of a beginner’s understanding, consider ninja a brother to parkour, and cousin to gymnastics.

I sometimes forget that many people outside of the ninja community don’t know what ninja is. No, I’m not talking about the covert agents garbed from head to toe in black of feudal era Japan. Ninja is a sport that has been on the rise worldwide since its introduction as a televised competition in Japan.

What is Ninja? Origins Of The Sport

This site is dedicated to the evolution of ninja as its own sport. Still, it would be impossible for me to explain to you what ninja is without giving mention and due credit to its beginnings as a televised athletics competition.

Ninja was first introduced to the world in 1997 when the producers of the Japanese program Kinniku Banzuke decided to host a segment on their show. In this segment, competitors made their way through a series of increasingly difficult obstacles in hopes to be the last man standing. The segment was named Sasuke (Ninja Warrior). It was so popular that it became a regular part of Kinniku Banzuke with semiannual airings.

It was so well received in fact, that even after Kinniku Banzuke was canceled in 2002, Sasuke continued to air as its own televised sporting event. Here we are 21 years and 35 seasons since conception, and Sasuke is still going stronger than ever.

It didn’t take long before Sasuke had gained a worldwide following. Airing in a number of countries, the US TV station G4 picked up the show, and gave it English subtitles, renaming each obstacle for their English-speaking audience.

But soon merely watching was no longer enough for Americans. G4 hosted their first ever American Ninja Challenge in the summer of 2007. In this competition, athletes got their chance to win a competitor spot on Sasuke. It continued for 2 years until 2009 when it was renamed American Ninja Warrior. And now, 10 years later, various international forms of Ninja Warrior competitions have taken root all over the globe.

Ninja Outside Of Television

Aside from these televised competitions, many athletes saw the value, excitement, and downright fun in these timed obstacle courses. Gyms dedicated solely to ninja began to pop up all over; first slowly, and then rapidly. Many tried to set up leagues. The National Ninja League was created in 2015 as a means of competition open to all, and there you have it. The sport of ninja.

How To Train For Ninja

Ask 1000 athletes of any sport their preferred training programs and you’ll get 1000 different answers. But there is one universal truth. In practice, you need to replicate the movements you’ll be making on game day. Ninja is on of the few sports in which you use nearly every muscle at one point or another. And the only sport in which you never know until the day of the competition exactly which muscles you’ll be taxing the most. That means that in training you have to train everything.

What is Ninja… Non-Standardized

I’ve been to my fair share of ninja gyms, and while there are a number of obstacles that any ninja gym will have (i.e. the warped wall), it would be extremely rare to find two identically built versions of an obstacle anywhere. That’s because it is not a standardized sport.

Obstacles are not made with required dimensions, weights, or materials. There is no list of every obstacle that may or may not appear in competition. On the contrary, ninja gyms are encouraged to try to come up with their own unique obstacles.

When training ninja, its not about mastering a specific obstacle, its about learning body awareness from any position you’re in. You must be able to make micro adjustments at any given moment to keep yourself from falling.

Learn, What is a Ninja? Through Videos

The best place to learn this type of body awareness is in a ninja gym. Depending on where you live, this may or not be a viable option. Ninja gyms are indeed a rapidly growing industry. Check out this Ninja Locator Tool to see if there is a ninja gym near you. I live in New England, where a lot of the big name ninjas just happen to come from. There are 3 ninja gyms within an hour drive of my apartment. There are at least another 3 gymnastics gyms, parkour gyms, or trampoline parks that incorporate ninja obstacles. However, there are many areas where it isn’t so easy to find ninja obstacles. Fear not.

Long before ninja existed, people interested in mastering body control got free practice using public playground equipment. Nowadays, you can even learn all kinds of cool tricks via the internet! Just make sure to be safe.

Other Sports That Build A Great Ninja Base

A number of sports mimic the body control and muscle groups most commonly targeted in ninja competitions. In particular, you’ll notice that the most successful ninjas have a background in one of three sports:

How Competitions Are Run?

Competitions aren’t always run the same way. But most of them follow a similar format. Sasuke, ANW, the NNL, and every other international iteration of Ninja Warrior that I have ever seen follow these rules:

This rule isn’t set in stone, but aside from practice speed courses, I’ve never seen a course with less than 6 obstacles. The qualifying rounds of ANW have 6 obstacles. Competitions held by the NNL run 10-20 obstacles. Where an obstacle begins and ends is left up to the course maker(s), so this rule may be a bit vague.

Your Run Ends when you Fail an Obstacle or Hit the Buzzer.

However the majority of courses end after only 1 mistake. Some obstacles, such as the warped wall, may offer a limited number of attempts to accommodate for the fact that even if you can’t complete the obstacle, there is no way to actually fail it.

Some courses will have a time limit. Others will not. This is at the discretion of the course maker(s).

Standings are determined by who can get furthest the fastest

I have been to competitions in which nobody is able to complete the course. On the reverse side of that, some competitions have a completion

rate of 70%-80% or more. Regardless, no competition is too easy or too hard because your aim is to get furthest the fastest. This may seem straight forward, but it has a serious impact on how a ninja will run a course.

Example: If I step up to the starting platform and I know the majority of the runners who already went have completed the entire course, then my mindset is going to be set on speed. The competition becomes who can sprint through the obstacles the fastest without making a mistake. On the other hand, if nobody has completed the course yet, my plan is going to be to take my time.Focus all my efforts on just completing every obstacle.

So What is Ninja? It’s A Sport.

Some people don’t consider ninja a full fledged sport in its own right just yet. And that’s fine. The first time I heard it referred to as a sport, I was skeptical too. But I came to realize that the reason I was hesitant to title it a sport, was because every sport I have ever known has been referred to as a sport from the first time I discovered it as a child. But now, having been so involved in the community for the past four years; regularly training specific athletic skill sets in preparation for competition with a group of like-minded people, I can say it is undoubtedly as much a sport as any sport I have ever been a part of.

Have any more questions/comments on what is ninja? Leave them in the comment section below and I’d be more than happy to help! 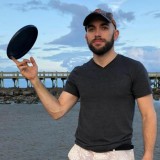 Founder of 'The Sport Of Ninja'